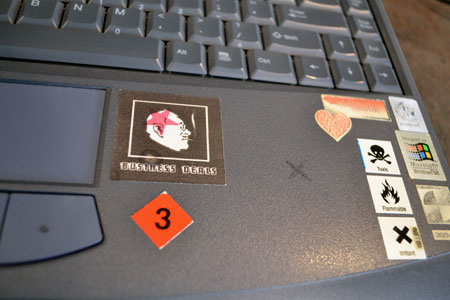 This brief tutorial on hiding content applies to Windows 95, 98, and 98SE. Although this method may be old hat or even irrelevant to the more experienced Windows users, I have found it useful on a number of occasions, and therefore think it’s worthwhile to share here at Perishable Press for future reference.

On Windows 98SE (and others), it is possible to create a folder that is both listed and inaccessible via the Windows file system. Using an old DOS trick involving an obscure character reference, we create a folder that, when clicked on via Windows, produces a “The File does not Exist” error message, thus denying any access. This “hidden” folder is completely accessible via DOS, and functions as any other “regular” folder. In Windows, the folder will appear with an underscore preceding its given name.

For example, using this method to create a hidden folder named “test” will produce a folder that appears as “_test” when viewed via Windows.

The method is actually quite simple. Open a DOS window and navigate to a directory in which you wish to create the hidden folder, and then carefully follow these steps:

After creating the hidden folder, navigate to the folder in Windows and attempt to gain access. You should receive the error message mentioned above. This is great, because the whole point of this exercise is to create a folder that is inaccessible via Windows for the purpose of “hiding” files and other content.

To add files to a hidden folder that you have named “test”, open a DOS window and navigate to the folder using cd path\"Alt+255"test (the "Alt+255" represents actual keystrokes – do not include any quotes). To add a file called “pancake” to the hidden directory, enter the following command:

Refer to the articles linked in the related resources for more information regarding these and many other DOS commands.

Remember, the hidden folder is by no means secure — it is openly available to anyone with a cursory knowledge of DOS. Fortunately, 99.9% of people either lack basic DOS skills or would not think of looking for a file beginning with a Alt+255 prefix. Happy hiding!

.htaccess made easy: Improve site performance and security.
Thoughts
7G Firewall version 1.6 now available!
DIY: Monitor File Changes via Cron working perfectly for over a decade.
Mastodon social is a trip. Glad I found it.
As a strict rule, I never use cache plugins on any of my sites. They cause more problems than they solve, imho. Just not worth it.
Currently on a posting spree :)
6 must come before 7.
My top three favorite-to-write coding languages: CSS, PHP, JavaScript.
+ More thoughts »
Topics
Find me on the social medias
Around the site
WordPress help
Favorite projects
© 2004–2023 Perishable Press • Yes Theme by Monzilla Media • Built w/ shapeSpace • Sitemap • Policy • RSS • John 3:16