Ditch Witch, I think I love you.. On my never-ending quest for fresh graphical chunks, many a ridiculous warning sticker have caught my eye. Upon encountering such gems, I immediately slip into stealth mode and plan for attack. Once the stage is set and the time is prime, I move in for the kill — another ripe chunk cold plucked from the vine. Of course, only the nonsensical, pointless, redundant or otherwise ridiculous labels are snatched from existence — anything even legitimately informative requires a more compassionate approach.. 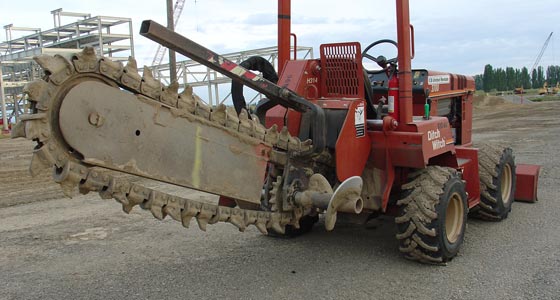 Such a Nice Chainsaw Enter the Ditch Witch. Recently, while out on the prowl, I happened upon the snarling insanity of the local neighborhood trench digger. My first impression of the machine suggested that someone had actually mounted a giant, five-foot chainsaw onto the back of a small tractor. "No way," I thought excitedly while sneaking in for a more intimate inspection. As I approached, the utter madness became all too real.. Suddenly, I found myself face-to-face with the ultimate acid trip: an industrial-strength, trench-digging, giant chainsaw. Fortunately, the beast was sleeping and nobody was watching me trip out.. 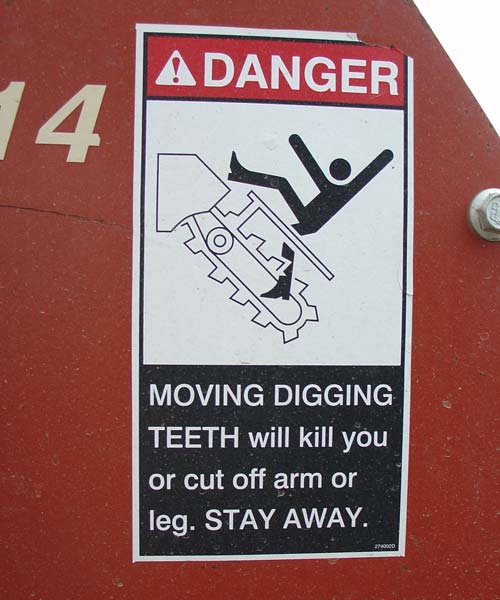 Es muy claro Delightfully salivating, I began investigating the mysterious Witch. The ditch blade itself consists of a thick iron chain sporting over a hundred melon-sized iron teeth that alternate along either side of a surfboard-sized plate. Extending beyond either side of the saw at its base, is a large, spiraling blade of approximately an arm’s length. Thoughts raced through my mind as I examined the myriad assembly of caution, warning, and danger decals scattered about the machine. It was like, "could they possibly have made that chainsaw any bigger?" "How quickly could this thing rip somebody in half if they were too slow in realizing the danger?" Good thing they slapped an oversize ‘DANGER’ sticker onto each side of this monster… not that reading it would be of much help if you suddenly found yourself being torn to pieces. Nonetheless, the warning remains clear: Danger! MOVING DIGGING TEETH will kill you or cut off arm or leg. STAY AWAY. Needless to say, I left the warning chunk in place and opted for a few choice digital photos instead.

Banhammer: Protect your WordPress site against threats.
Thoughts
Mastodon social is a trip. Glad I found it.
As a strict rule, I never use cache plugins on any of my sites. They cause more problems than they solve, imho. Just not worth it.
Currently on a posting spree :)
6 must come before 7.
My top three favorite-to-write coding languages: CSS, PHP, JavaScript.
If you’re not 100% sure that you can trust something, you can’t.
Wishing everyone a Merry Christmas / Happy Holidays & much success in 2023.
+ More thoughts »
Topics
Find me on the social medias
Around the site
WordPress help
Favorite projects
© 2004–2023 Perishable Press • Yes Theme by Monzilla Media • Built w/ shapeSpace • Sitemap • Policy • RSS • John 3:16