We are continually on the prowl for fresh chunks — whether it’s business or pleasure, day or night, scanning the immediate environment for tasty visual gems is a constant delight. Perhaps you find yourself lulling over tacky magazines at the dentist’s office, when suddenly — out of the corner of your eye — you notice it: a small triangular decal attached to the side of the waiting-room television warning people about something with an absolutely ridiculous icon to reinforce its message. Unlike the typical media fodder enslaving the likes of “People” and “Time”, the TV warning chunk shows true character — slightly worn and abstract with a sense of authenticity and timelessness. Casually, you rise from your waiting seat and meander over to the TV, as if you may be thinking about changing the channel or something. As your eyes intently examine the coveted nugget, you realize that it is definitely a “must-have” to add to your collection. A quick scan around the room to verify that nobody (surprise) is paying attention, and it’s time to strike! With a single, fluid motion, you silently reach around the side of the TV and peel off the delicious morsel… 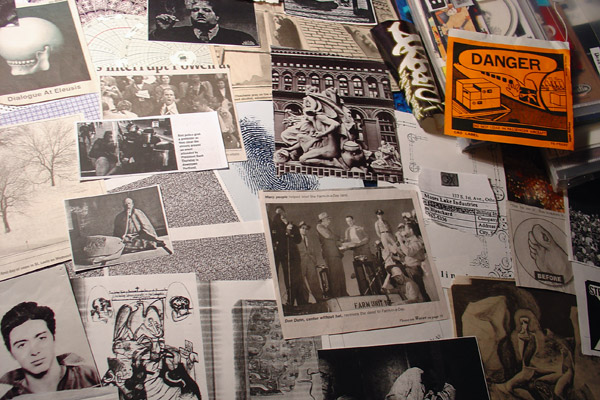 Perishable Chunk Collection Collecting interesting and inspiring chunks accomplishes several important goals. First and foremost, chunk collecting provides the collector with a continually growing array of graphical imagery for use in art and design projects. Secondly, the perpetual seeking of new material keeps collectors on their toes — alert, focused, and constantly aware of their surroundings. Thirdly, collecting rare images and other abstractia is just plain fun. Chunk collecting is more like a way of thinking or seeing, actually, as the visual realm becomes a virtual offering of possibilities, adding anticipation and even excitement to the game. With practice, the collector’s hunting skills improve, enabling discoveries otherwise hidden. And with time, the collector’s arsenal of visual rarities tends toward infinity, as new chunks are acquired, mixed, and shared.

…Chunks collected correlate to the interests of the chunker — as Perishable is drawn to complex patterns, Kalacakra to gothic, and myself to ironic/humorous chunks. Aside from a general theme that the interest gravitates toward, we all collect outside of this broad categorization as well. […] Other than inspiration, there is a social aspect to the process — sharing the chunk with other interested parties, and generating stimulating, creative thought. Chunks tend to be very varied in appearance and rich in texture or bold in design or idea, which probably stimulates personal creative processes also…

Chunkology, then, is the study of the art of collecting chunks. As with any science, chunkology strives to examine every aspect of chunk collecting to improve understanding and involvement. We invite you to explore the premier exposé of chunkology, concisely written by fellow Perishable Press author August Klotz. Originally printed as an article in the underground art publication, Dead Letter Art (Spring 2004), Chunkology is currently featured at art{space} magazine online. In his article, Professor Klotz sheds light on the overall implications and purpose of chunk collecting, and provides several important insights as to the true nature of this incredibly esoteric pursuit.

Blackhole Pro: Trap bad bots in a virtual black hole.
Thoughts
7G Firewall version 1.6 now available!
DIY: Monitor File Changes via Cron working perfectly for over a decade.
Mastodon social is a trip. Glad I found it.
As a strict rule, I never use cache plugins on any of my sites. They cause more problems than they solve, imho. Just not worth it.
Currently on a posting spree :)
6 must come before 7.
My top three favorite-to-write coding languages: CSS, PHP, JavaScript.
+ More thoughts »
Topics
Find me on the social medias
Around the site
WordPress help
Favorite projects
© 2004–2023 Perishable Press • Yes Theme by Monzilla Media • Built w/ shapeSpace • Sitemap • Policy • RSS • John 3:16