Heads up! This post is a giant rant about Apple screwing up the user experience (UX). If that is not what you want to read, then now is your chance to hit that back button and escape. Otherwise, if you feel like hearing all about it, continue reading.

With Apple devices in the past, you could log in to an Apple account or not. No hassles. No worries. Just enjoy the software. Enjoy that super smooth Apple user experience. Right? But these days it’s like the damn house is on fire, such a freaking emergency that you MUST LOG IN NOW. So absolutely important that you LOG IN NOW that Apple kills the entire user experience with its endless nags and brute-force thuggery.

All users don’t fit into the same box

Logging in to an Apple account and enabling two-password authentication is OPTIONAL. It is 100% the user’s choice whether to log in, enable 2-factor or any other feature. If I don’t want to log in, if I don’t want 2-factor — for any reason — then please do shut up, get out of my face, and kindly STOP nagging me to oblivion. i cAn tHiNk fOr mYsELf, tHaNk yOu vERy mUch.

Apple is killing its UX with needless, endless nagging.

As an example of what I’m talking about here, here are some screenshots showing what the user experience is like just trying to play a game on my iPad. 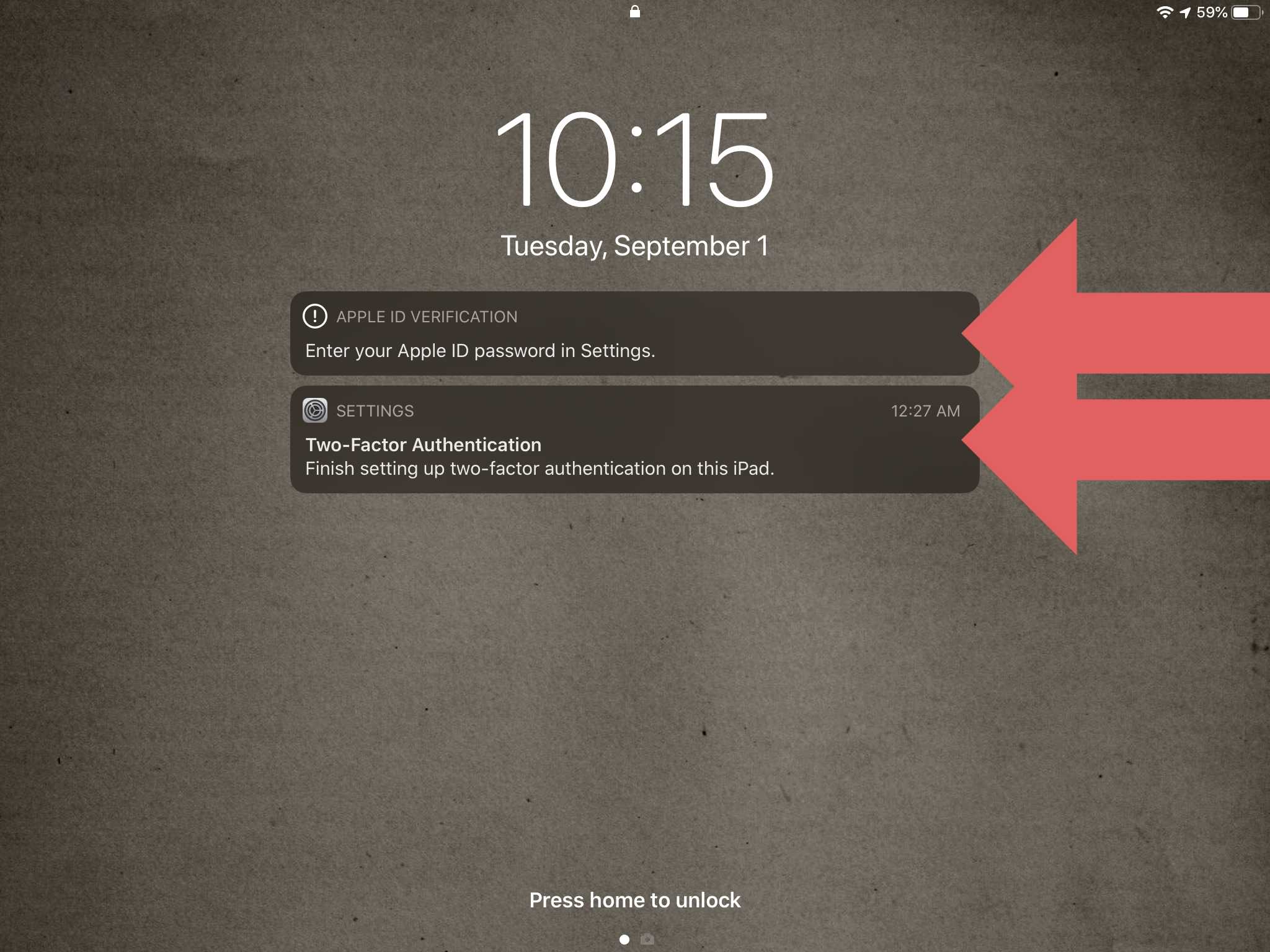 After picking up my iPad to play some games, this is what I see.

Why is it SO important for Apple that all users always log in?

After entering my passcode to get in, the “settings icon” nag starts up.

The red icon badge of shame is more than enough for users to get the message. Simply no need for all the popup nagging. 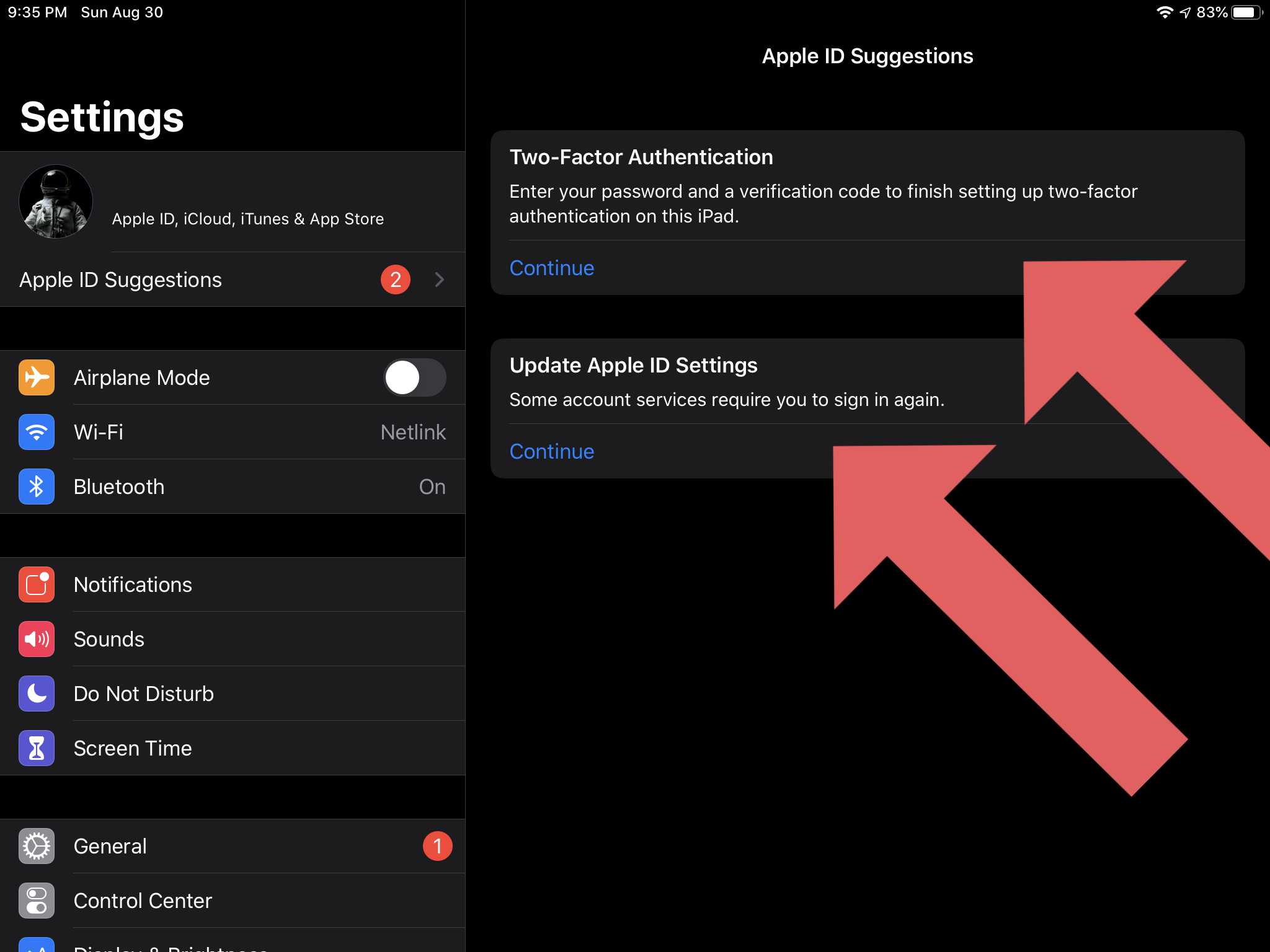 What’s the fuss about? Apple wants me to log in and enable two-factor authentication.

Not all users need or want two-factor authentication. It’s a pain. 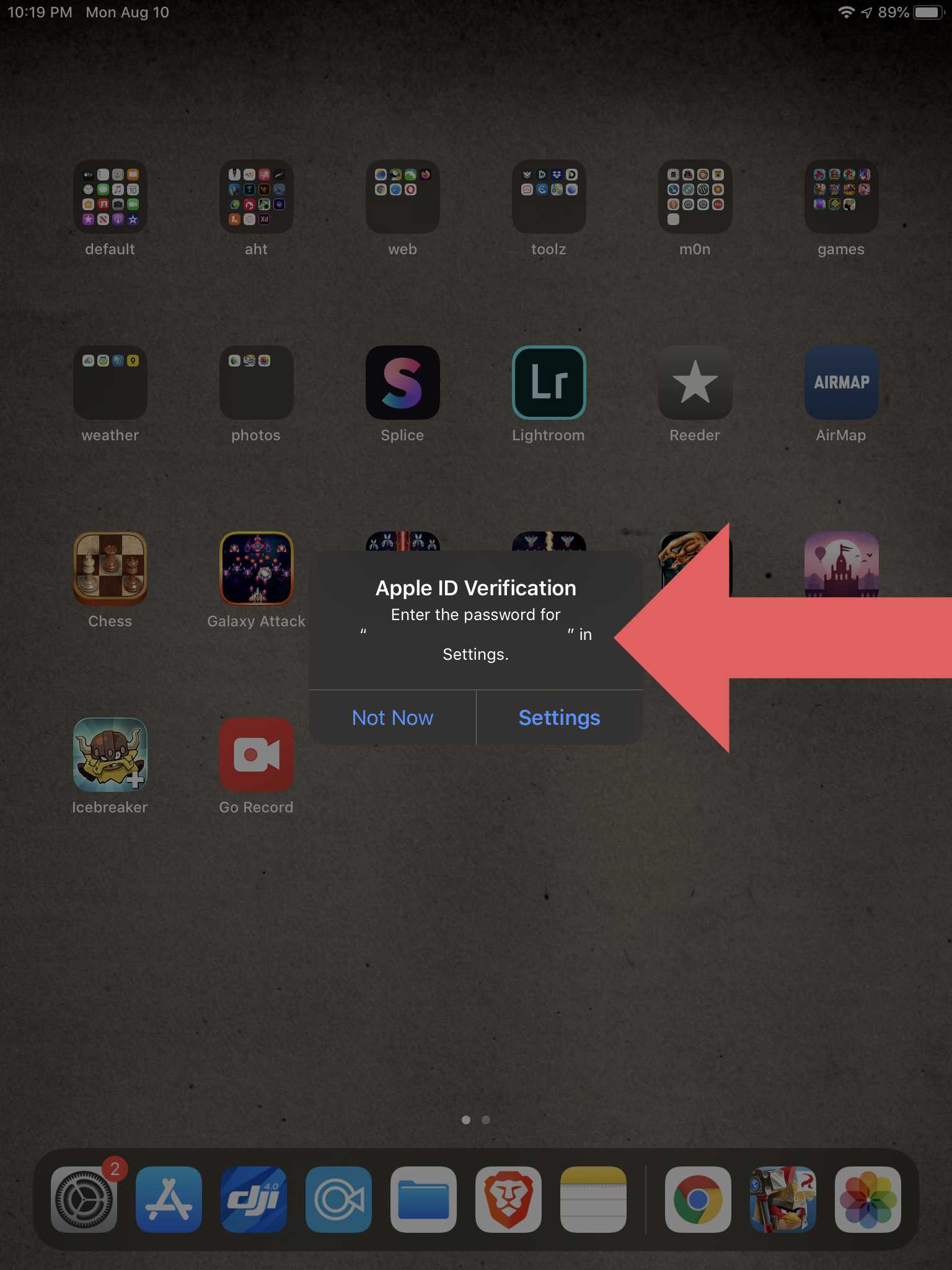 Every time I open my iPad, I get bombarded with these annoying nags.

I just want to use my iPad to play a game. But Apple won’t let me. 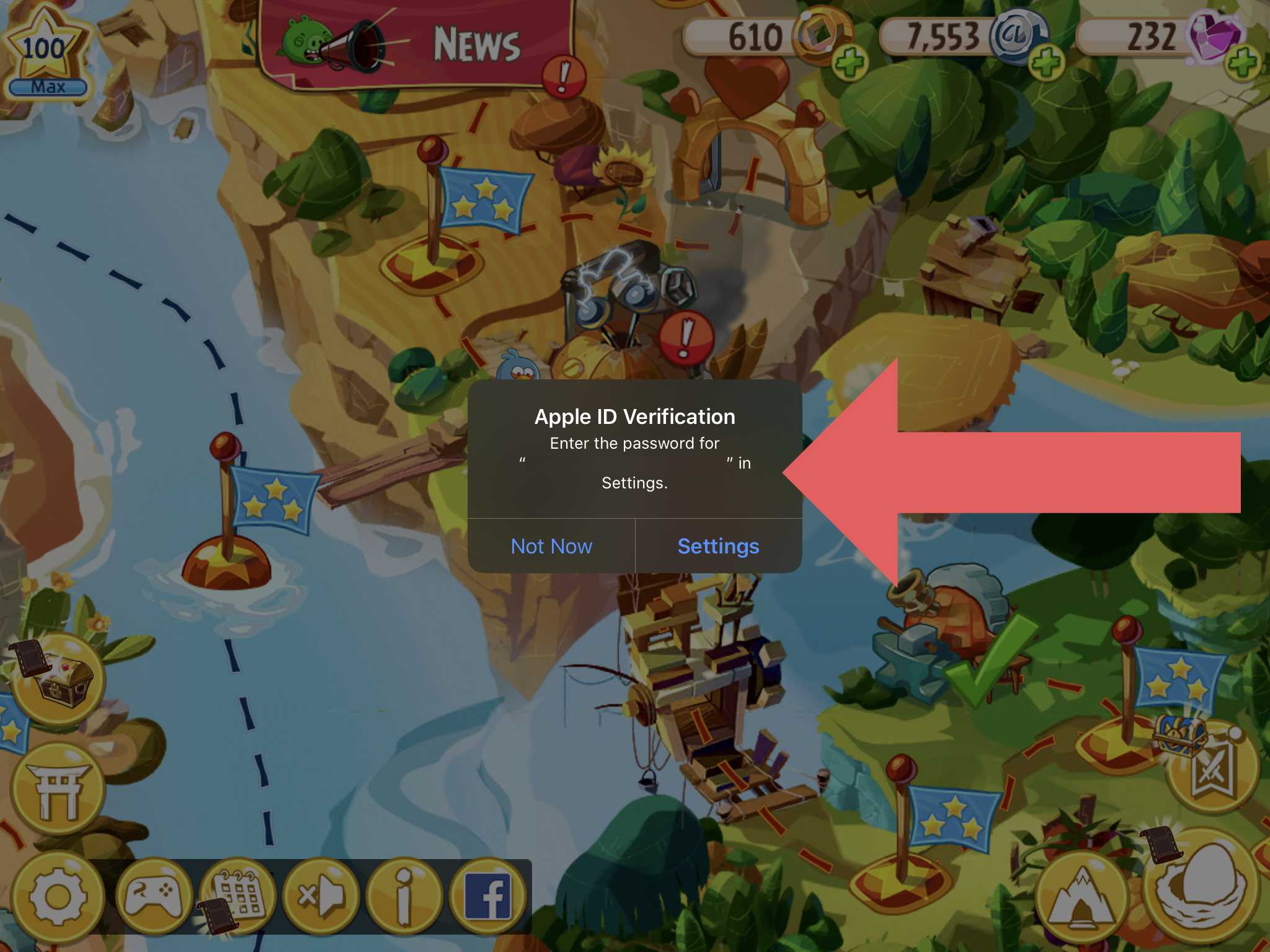 Every time I open my game, Apple nags me to enter my password. Over and over and over.

Why doesn’t Apple give users a way to permanently dismiss the nags? 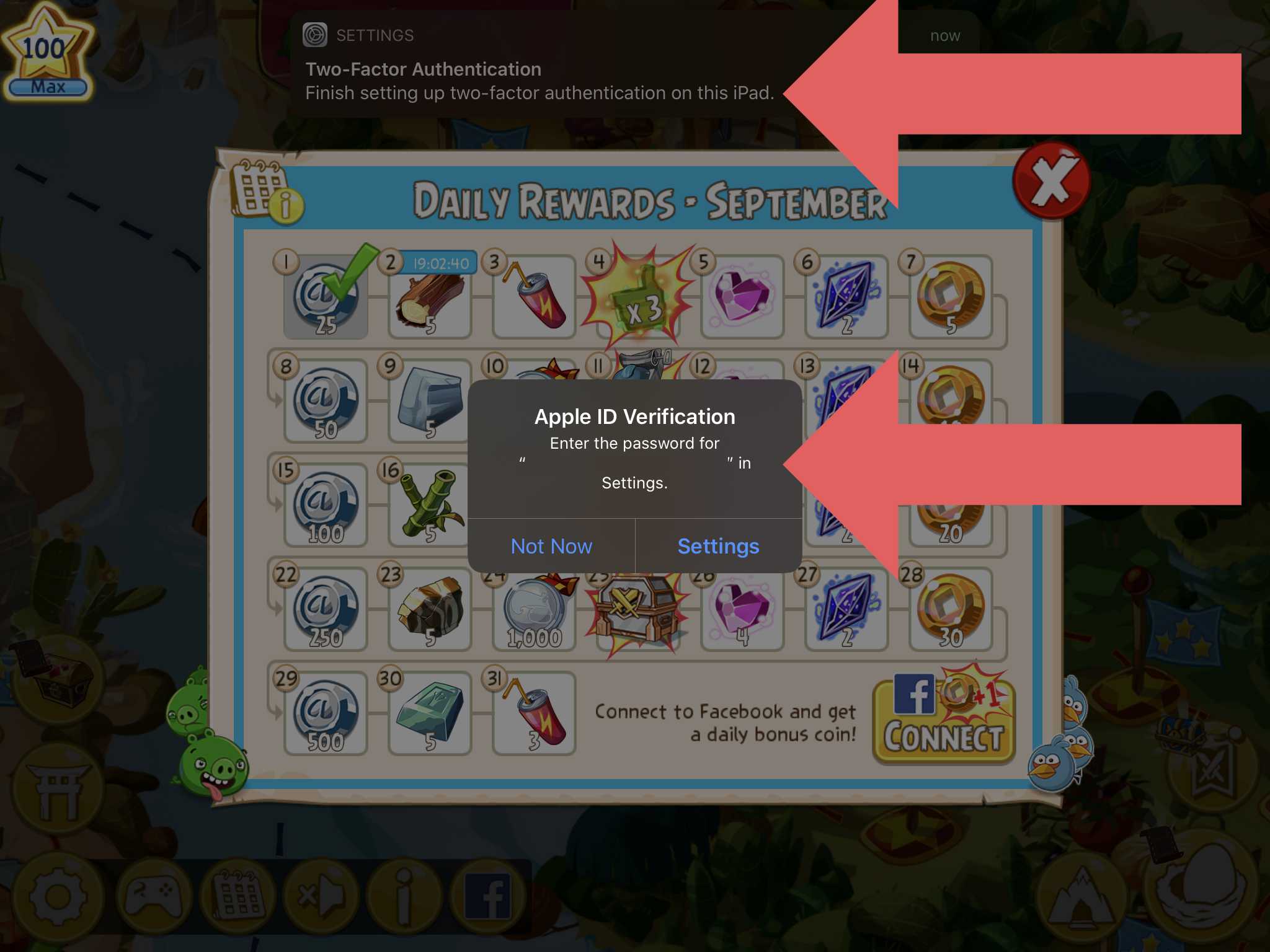 Why do users have to play “whack-a-nag” just to use their device? 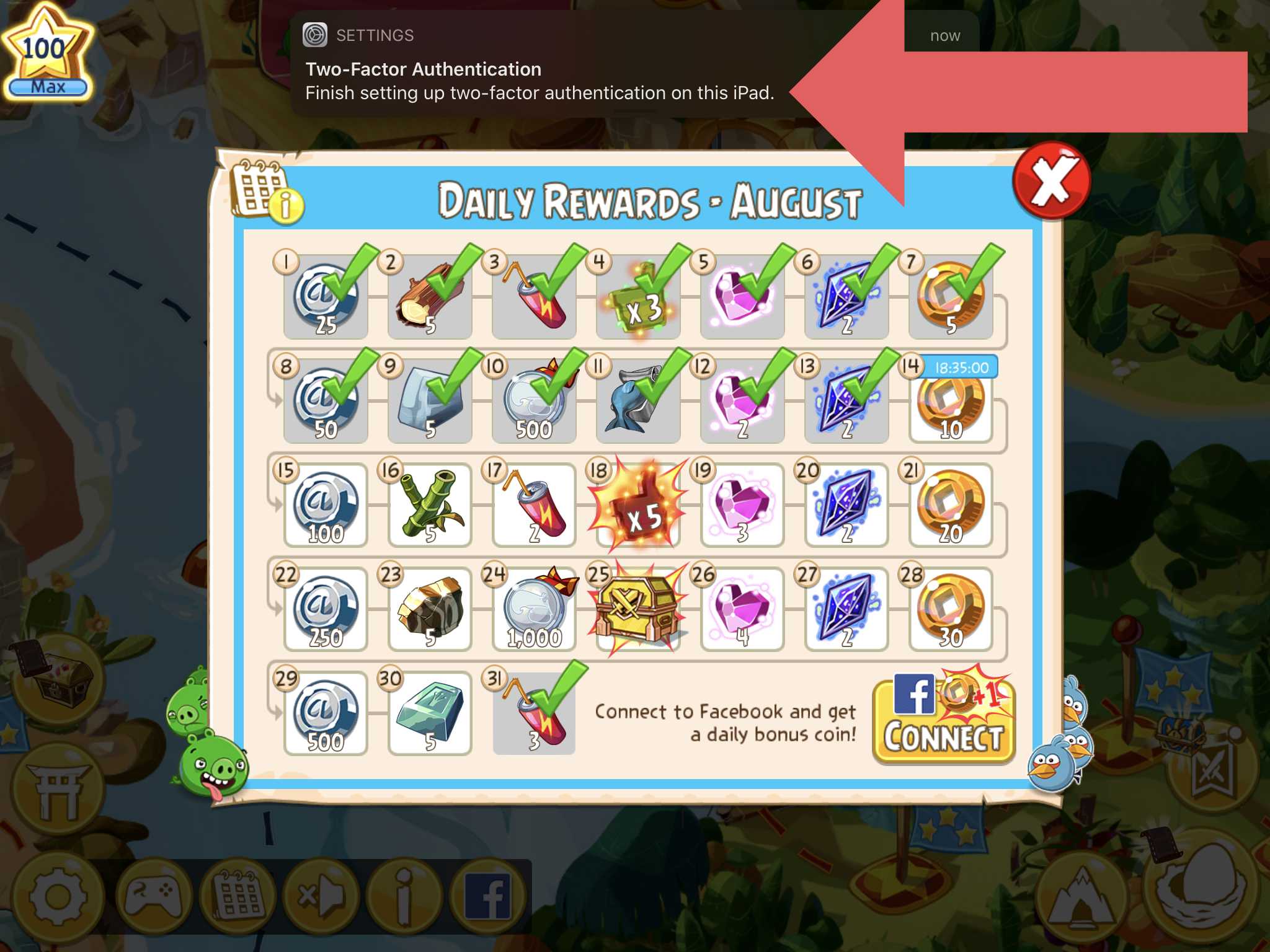 And again. After fighting my way through seven nags so far, Apple will never stop nagging.

Fighting thru the nags is like a meta game on top of the game that I’m trying to play.

I use my iPad to play games and goof around with photos, etc. It’s not a serious or critical device for me, although it used to be fun to use it once in a while. Not lately though, as the constant and thug-like nags are making the device impossible to use.

It’s been like this with the endless nags since some recent iOS update I don’t remember which one. All I know is that I used to ENJOY playing on the iPad. But now it’s next to impossible. Every day, every screen. SO URGENT THAT YOU LOG IN RIGHT NOW. Nag nag nag. I can’t play a game for two seconds without getting attacked by nags. The red dot on the settings icon. The two nags on the settings screen. The in-app pop-over nags. The pop-over nags that just magically appear on any screen at any time. Apple has killed its own UX.

It’s like WHAT’S THE EMERGENCY GUYS. Where’s the crisis? What on earth is going to happen if I don’t want your new features? Don’t want an Apple account? Stop trying to strong-arm millions of users into constantly logging in to your system. For crying out loud, give your users half an ounce of credit. Stop catering to the lowest common denominator. If users really WANT to log in and enable two-factor authentication, well gosh I think they’ll be able to figure it out.

The ONLY thing you are accomplishing with the endless nags is that you’re killing the famed “apple” user experience and turning off a LOT of users. Read thru your own forums once in a while. Try LISTENING to user feedback. Stop PUSHING your stuff so hard. Give your users some credit. They KNOW where to find the stupid login screen if they really want to lOg iNtO tHeiR aPpLe aCcOuNt.

Will this post help anything? Probably not with Apple. Sucking up tons of user data apparently trumps the entire user experience forever. For millions of users. Millions of clicks every day, so much time wasted dealing with that urgent need for users to log in and enable two-factor authentication on every device always. Even when it’s not needed. Even when it’s not wanted. For eternity.

BBQ Pro: The fastest firewall to protect your WordPress.
← Next Post
7G Firewall: September 2020 Update
Previous Post →
About the Auto-Generated WP Sitemaps and How to Disable Using Simple Code or a Free Plugin
Welcome
Perishable Press is operated by Jeff Starr, a professional web developer and book author with two decades of experience. Here you will find posts about web development, WordPress, security, and more »

GA Pro: Add Google Analytics to WordPress like a pro.
Thoughts
The Legend of Zelda: Tears of the Kingdom coming May 12, 2023. Absolutely pumped.
Favorite thing for breakfast is a tall glass of cold water. Hits the spot every time.
Fall is my favorite season :)
Still a few days left before “Unlimited” pro licenses are no longer available.
Getting back into it after a nice mini vacation. Time to ramp up and get busy.
Enjoy my 7-year hand-curated collection of free online tools for web dev and design.
Weapons required to rule the world: the weather, common cold, plenty of idiots.
+ More thoughts »
Topics
Find me on the social medias
Around the site
WordPress help
Favorite projects
© 2004–2022 Perishable Press • Yes Theme by Monzilla Media • Built w/ shapeSpace • Sitemap • Policy • RSS • John 3:16