Switching from PC to Mac

I finally made the switch from PC to Mac. My previous machine was an old Sony Vaio purchased in 2005. It was top of the line then, and actually worked great until about a year ago, when it inevitably began dying a slow, complicated death. The time to finally buy a new computer was fast approaching..

The decision to switch to Mac/OSX after years of working on PC/Win happened gradually, beginning with a small MacBook I purchased in 2006 for cross-platform/browser testing. At 13.5 inches (or whatever), the screen was too small to work with full-time, but whenever I did use it, it felt like flying an airplane or something. It was just so sleek and fast and cool, much more streamlined and elegant, a real pleasure to use.

Then a few years later, I pick up an iPhone and more recently an iPad. Those devices are also sleek and intuitive, so much so that my 7-year-old daughter has mastered (and claimed) both of them. So despite having used PCs forever, the decision to switch to Mac was easy, more like a natural progression or next step than some sort of a giant change.

At first I had decided on a Mac Pro, but after reading through forums and thinking about it, I realized that I just don’t need that much of a machine. Every now and then I might get crazy with some video editing or 3D rendering, but mostly I would be doing stuff like:

I also enjoy watching movies, streaming media, and playing games, but I really don’t need a mac tank to do what I do. Even if I worked ten times faster, buying a Mac Pro would have been wasteful. Seriously, I did (just about) everything I needed to do on that old & busted Vaio, so something faster and better yes, but also something that I could really use and get the most out of – something worth the time and money.

After much thought and research, I was pretty much decided on getting an iMac, but not sure of which model or configuration. There are many options/upgrades available, including awesome stuff like two internal drives and a 27-inch monitor. I wanted everything, but my budget was locked at $3,000. So I really spent some time formulating the best possible configuration for my needs. Finally, on Black Friday 2010, I pulled the trigger on a 27″ iMac with the following configuration:

I think this configuration is perfect for my needs. The wide screen and ample memory enabled me to eliminate many devices and really optimize and streamline my office space. Here is a quick photo of the new setup: 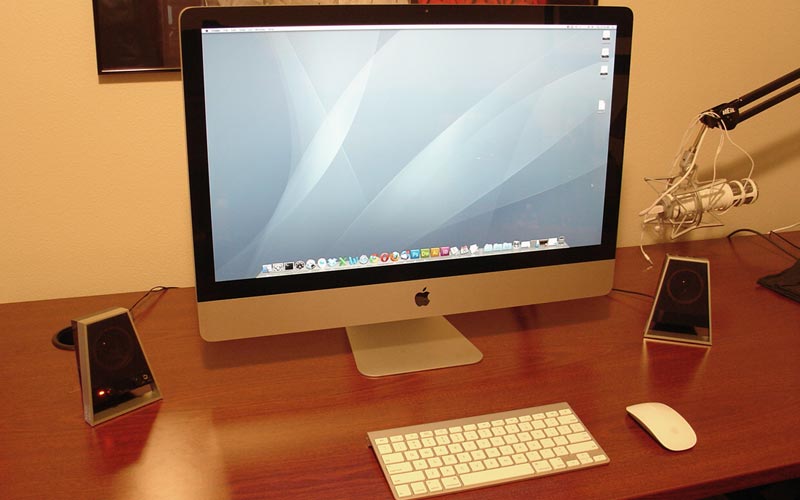 Amazingly, my old machine completely died literally the day after I had finished transferring all files to the iMac. Now that I’ve had a couple of months to dial it in and really use it, there are a number of things worth mentioning. Let’s start with the good stuff and go from there.

Overall, everything is great. The iMac is much faster and quieter than my old Vaio. As an all-in-one machine, the iMac requires fewer cables and less space. And the display is just beautiful, plenty of space for really setting up shop. Here is a screenshot showing a recent workspace setup: 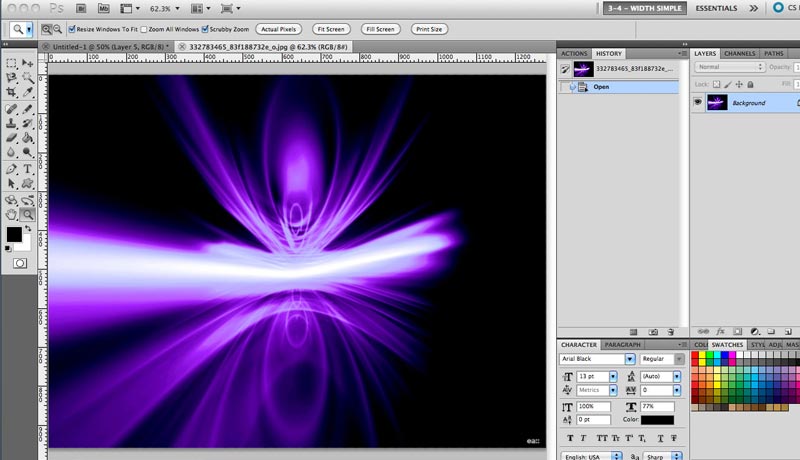 As you can see, plenty of space for everything I use during a typical day of web design:

Plus with 8GB RAM, there’s plenty of memory for running other programs/apps as needed. As a side note, it would be cool to get an app that shows you in real-time how much system resources were in use. But I digress..

Switching to a Mac, I knew that I would need new software, but there are few programs that I use that simply aren’t (yet) available for Mac/OSX. A good example is the application used for Stamps.com, which we use for postage for Digging into WordPress. There is no Mac version, but by running a virtual Windows environment using Parallels, I can run the Stamps.com PC software, plus everything/anything else that is Windows-only or that I don’t feel like re-purchasing. There are other virtual-windows apps available online, but Parallels works great for my needs, which includes running Windows XP, Windows 7, and several flavors of Linux. I have to say it, running Windows on Mac is a trip!

The one luxury I afforded myself for this machine is the 256GB SSD drive. It serves as the primary drive for the machine, and is where the operating system is installed by default. Running the OS and apps on the SSD makes everything lightning fast. Once again, the machine waits for the user. For example, on my old PC, something was wrong, and it took literally five minutes for a complete boot. And because the shutdowns required equal time, the frequent task of rebooting the computer was utterly hellish. The irony is that I now enjoy a 30-second reboot, but rarely need to do so.

Before getting into some of the difficulties I’ve experienced, here are a few other awesome things worth mentioning:

There really are too many good things to mention here in this post. If you already own/use a Mac, then you know what I’m talking about. For anyone thinking about switching to a Mac, these are just the highlights of the good things, which far outnumber the following list of annoyances and other issues I’ve personally encountered.

As with any new machine, there are things that work and things that just don’t. Customizing your machine is a process of using it, fine-tuning preferences, and finding workarounds where necessary. Most issues are easily resolved with a little searching around, but there are some that will just leave you stumped. Here is my working list of such baffling Mac conundrums (in no particular order):

Playing media
Until I discovered VLC, I had a terrible time trying to play all of my different audio & video media formats. VLC works great for most of the non-Windows media I can throw at it, and then I guess there’s virtual Windows for the WMA/WMV stuff. I can play Quicktime on Windows, why can’t I play Windows media on Mac? Further, as great as VLC is, it can’t do one thing that is easily done on Windows: play multiple instances. As far as I can tell, there is NO way to loop multiple instances of video (any format) on a Mac (without virtualizing).
Update 2011/01/21: As mentioned in the comments, Windows Media files are playable in Quicktime (up to 7) with Flip4Mac. Thanks to rick and Louis for the tip!
Time Capsule & Time Machine
As mentioned, my iMac has two internal drives. The 256GB SSD is used for the OS, aps, and settings; and the 1TB SATA drive houses all of my working & archive data. Unfortunately, the built-in backup app, Time Machine, refuses to backup the built-in SATA/data drive. It does a great job at backing up the primary/OSX drive, but after countless hours online and on the phone, there is still no way to include that second internal drive (the one with all my files on it) in Time Machine. The workaround? Manual backup via external drive. Ugh.
Calculating sizes/counts of large folders
Ridiculously long waits to get the properties of large folders. I thought this may be something more specific to something on this machine, but after reading around in the forums, it seems that “Get Info” slowness is a common problem. Hopefully a fix or solution will present itself.
Right-click, new file
The ability to quickly create a new file would be awesome. Windows makes it look so easy, from virtually anywhere. If there is a way to do this, please share with a comment.
No cut?
The closest I have been able to get to Windows’ “cut” command is dragging files to their destination while holding the command button. It works, but it feels sloppy for some reason. Sometimes a new finder window will popup while you are dragging to destination. I would love to be able to “control-x” again!
Update 2011/01/21: Solved! Check out TotalFinder for tabbed Finder browsing, cut/paste, and tons more good stuff. Thanks to v3c, Helen, and Priit for the tip!
Copying/pasting folders
In Windows, when pasting a folder into a directory that contains a folder of the same name, nothing is erased (in either folder). If the two same-named folders contain different files, at least one copy of each file will exist in the resulting folder. In OSX, similarly moving a folder results in a complete replacement: the existing folder is erased and replaced with the moved folder. This behavior probably has its own merits, but it doesn’t seem as flexible when it comes to file management.
And last but not least..
No Blu-Ray! Bummer.
Update 2011/01/21: Transferring files from iPhone/iPad to Mac
I totally did NOT expect something as simple as transferring my iPhone photos to my Mac to be virtually impossible. After 2+ hours trying everything short of jailbreaking my phone, I finally threw in the towel and cracked open Parallels. Virtual WindowsXP let me plug in my iPhone/iPad, transfer my photos, and delete the originals from the device with a few simple clicks. Yes, you can use iPhoto to import the camera-roll photos, but any non-iPhone-origin files will not be imported. Then, after importing with iPhoto, you don’t actually have access to the files themselves until you export them out of iPhoto. What a nightmare. Not only is this is waay too complicated, there is also no way to delete your photos from the phone after the transfer. I honestly hope that I am completely wrong about this, and that there is an easier way to manage iDevice files from a Mac.

And finally, some app-specific issues (because I just can’t help myself):

If anyone knows how to fix/resolve/workaround ANY of these issues, please leave a comment. Hopefully, there’ll be some easy/good solutions & tips that can be assembled and fleshed out for a follow-up post. That is the goal.

I hate to end my fancy “switch-to-Mac” article with a bunch of second-hand annoyances, but really, that’s all they are. The iMac itself is an incredibly powerful, capable, and beautiful machine. It is so much more than a replacement computer – it has improved and elevated my entire working operation. From someone who works constantly on the computer, it’s the best arm & a leg I ever spent. </rimshot>

62 responses to “Switching from PC to Mac”

SAC Pro: Unlimited chats.
Thoughts
Mastodon social is a trip. Glad I found it.
As a strict rule, I never use cache plugins on any of my sites. They cause more problems than they solve, imho. Just not worth it.
Currently on a posting spree :)
6 must come before 7.
My top three favorite-to-write coding languages: CSS, PHP, JavaScript.
If you’re not 100% sure that you can trust something, you can’t.
Wishing everyone a Merry Christmas / Happy Holidays & much success in 2023.
+ More thoughts »
Topics
Find me on the social medias
Around the site
WordPress help
Favorite projects
© 2004–2023 Perishable Press • Yes Theme by Monzilla Media • Built w/ shapeSpace • Sitemap • Policy • RSS • John 3:16