Welcome to a new series of articles exploring minimalism in modern web (and graphic) design. With this post, we begin our exploration of the Web’s most inspiring and intriguing minimalist presentations. Staying true to the spirit of minimalism, each showcase will be kept as clear and concise as possible, focusing on tangible and practical aspects of each featured site. We will discuss aesthetics and functionality on both sides of the browser, examining elegance and simplicity within a Web-Standards context..

For our premier review, I have chosen Jeff Ngan’s recently redesigned site, Equivocality. I have been reading Jeff’s suspenseful, introspective offerings for many months now, sharing in his consistent openness and sincerity, wit and insight. Upon reading about his site’s recent redesign, I immediately dropped by to check it out..

Equivocality’s new minimalist design is very impressive. The site appears clean, bright and refreshing and navigates with natural simplicity. Jeff has eliminated clutter to focus on content, which is strongly unified within the site’s sharp, spacious design. Attentive visitors will revel in the site’s exquisitely restrained details, such as the subtle texture provided by the bleached background grid, or the dynamic interplay between complementary typefaces, Arial and Avenir. Overall, the design’s thematic neutrality and universal approach inspire visitors to relax, focus, and enjoy.

Let’s examine a few of the site’s key details, one area at a time.. 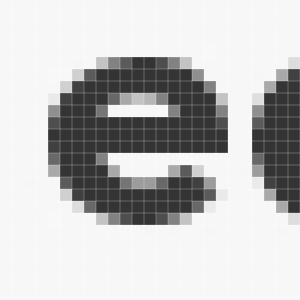 Setting the tone for the entire site, Equivocality’s header is concise, bold and balanced. The site’s title is the main focus of the header: “equivocality” displayed in heavy, lowercase Avenir, and emphasized within a well-padded division featuring an off-white, #F7F7F7 background. Beneath the title, site navigation is both conventional and obvious, visually unified with a connective gray stripe, which also suggests a careful deliberation of minimalist design. Beyond these features, the Equivocality header demonstrates true minimalist expression via intentional omission of typically included items such as images, icons, advertisements, and even the tagline.
The Content 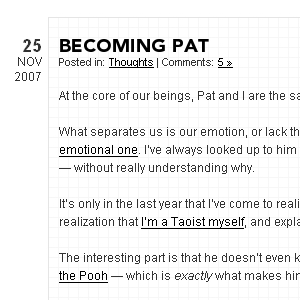 Equivocality’s main content (posts and articles) is presented via single column layout of narrow, 480-pixel width. Each entry is punctuated with an offset post date that balances its own potential excessiveness with a strategic dose of style and usability. Paragraphs, headings and images are consistently well-spaced and balanced. Paragraph text is presented with generous leading and excellent contrast. Images are displayed naturally, without borders. Each textual element is treated with keen minimalist awareness, inevitably manifesting a synergistic fusion of organic detail and dynamic cohesion.
Site Details 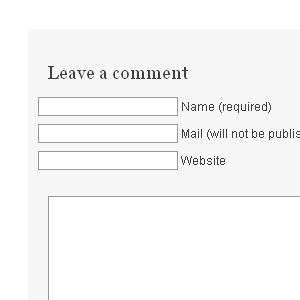 At this point, Jeff has clearly demonstrated his mastery of the minimalist design ethic. Beyond the previously discussed aspects, there remain several additional details worth mentioning. One of these is the “comments” area, which follows suit by providing copious amounts of white space, subtle background graphics, and a straightforward comment form. In fact, the comment area is so lightly designed that one may argue that it remains yet unfinished. Another area of concern involves the apparent misalignment of the comment form, as well as the rhythmically disorienting indentation of both pullquotes and comment-author subtitles. Even so, these characteristics may prove intentional, serving to subconsciously reinforce the site’s modern-industrial subtext. Finally, it is by strategically relocating and consolidating key site features into Archive and Asides pages that Jeff is able to maintain a consistent focus on minimalist content presentation.
The Footer 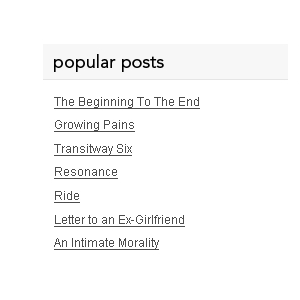 Last but not least, my favorite part of Jeff’s minimalist design is the site’s footer, which includes a bold, stripped-down menu area featuring only the essentials. Impressively, Jeff presents only two sets of navigational links: “popular posts” and “recent comments” — everything else has been systematically eliminated or relocated. Only after contemplating the littered, overstuffed sidebars and menus cluttering many typical sites does one understand the visionary restraint required to craft such a incredibly clean menu area. No ads, no search bar, no tags or categories — only two sets of links and a few obligatory items underneath. This is savvy, cutting-edge design of which many sites would do well to emulate.

Along with our premier site review, we present a “mini-interview” with Equivocality’s Jeff Ngan. This brief question & answer session provides Jeff an opportunity to share his thoughts on the pros and cons of Equivocality’s current minimalist design, as well as some insight into minimalism in general..

Q: What are the strengths of your site’s current design? What do you like about it?

A: I like this design because it’s universal. That was the main thing I had in mind when I created it. There’s such an assortment on my blog — short entries, long entries, really long entries, blockquotes, pullquotes, inline images, thumbnails, videos — I wanted a layout that could match it all. When I look at a bunch of different pages, I don’t want to think “This looks like a template designed for a different type of content.” Pictures are especially difficult to blend into colourful designs, so I made the background pure white. The effect is that the contrast of the content is strong, and images and text pop out of the screen. Minimal designs also tend to load and render quickly. This wasn’t a priority when I was coming up with the idea of what I wanted, so it’s a nice little bonus.

Q: What are the potential weaknesses of your design? What aspects could be improved?

A: Currently, only the text size and spacing is based on ems. I’d love to create an em-based layout one day, where the width of the main column and images expand with the text (Jon Tan is a beautiful example of such a minimalistic, em-based layout). The thing is, it’s a rather spartan design. As a web designer, it doesn’t really “show off” what you can do, because many don’t understand that working with less is actually quite challenging. Some people also find minimalism boring. Simple and elegant perhaps, but boring. It all depends on what you’re going for.

Q: What does minimalist design mean to you? What are your thoughts on minimalism?

A: Like Helvetica, an effective minimalistic design will adapt to the context in which it’s placed. It should communicate information clearly, so that the focus is on content instead of design. I’ve always believed that minimalistic design deals more with what isn’t there than what is. Involved is a stripping down of superfluous elements, such as animated menus, clever javascript, and design details that serve no purpose. There’s a quote by Antoine de Saint-Exupery that sums it up nicely, “Perfection is achieved, not when there is nothing more to add, but when there is nothing left to take away.”

Many thanks to Jeff Ngan for sharing his design and ideas with us. I am also very grateful for Jeff’s willingness to participate in my first attempt at showcasing minimalist sites. He has been enthusiastic and extremely helpful throughout the entire process. — Thanks Jeff! :)

BBQ Pro: The fastest firewall to protect your WordPress.
← Next Post
Have You Seen Endgame?
Previous Post →
Laser-Focused Feeds and Smarter Feed Management

Digging Into WordPress: Take your WordPress skills to the next level.
Thoughts
I try to make use of default functionality whenever possible. For everything.
Upgraded iMac to Ventura. Disabled "unsend mail" feature and found some (now) hidden wallpaper settings. Overall smooth upgrade.
( $this ) is bloat. ($this) is better.
The Legend of Zelda: Tears of the Kingdom coming May 12, 2023. Absolutely pumped.
Favorite thing for breakfast is a tall glass of cold water. Hits the spot every time.
Fall is my favorite season :)
Still a few days left before “Unlimited” pro licenses are no longer available.
+ More thoughts »
Topics
Find me on the social medias
Around the site
WordPress help
Favorite projects
© 2004–2022 Perishable Press • Yes Theme by Monzilla Media • Built w/ shapeSpace • Sitemap • Policy • RSS • John 3:16