I recently spent some time wrestling with various e-commerce/shopping-cart/membership plugins. One of them was of course the popular WP e-Commerce plugin, which uses a directory named “downloadables” to store your precious goods. I had some large files that needed to go into this folder, but the server’s upload limit stopped me from using the plugin’s built-in file uploader to do so.

On most servers, there are limits to how much data you can upload. When dealing with PHP scripts, the upload, download, and similar limits are set in the php.ini file. If you have access to this file, or can create a localized version in the target directory, then increasing the upload limit for large files is as simple as adding these two lines:

Unfortunately, there are many hosting/server scenarios where access to php.ini is unavailable. Fortunately, .htaccess provides an alternate method of increasing upload limits. If you have access to .htaccess files, then raising the upload limit is done with these two lines:

With either or perhaps both of these methods in place, you should have no problem uploading large files to your server. But some servers require more advanced configuration to increase upload limits. Such was the case for my WP e-Commerce experiment: hosted on another server, and neither the php.ini nor the .htaccess method were going to work. So I gave up on the built-in uploader and tried just uploading the large files directly via FTP.

Sounds simple enough, and FTP usually works great, but NOT this time. Somehow the WP e-Commerce plugin had locked the downloadables directory via deadly combination of restrictive file permissions and mod_authz_host via .htaccess.

So now I needed a way to bypass both of these measures. Starting with the .htaccess file in the downloadables directory, I logged into my server control panel to take a look. It contains three lines:

Unfortunately, this file was created with @chmod($file_handle,0665);, which means its permissions prevent any non-root editing, such as via Plesk or FTP. Looking then at the downloadables directory, the permissions were 775 – less restrictive, but owned by apache, so no editing of that file either. Here it is visually: 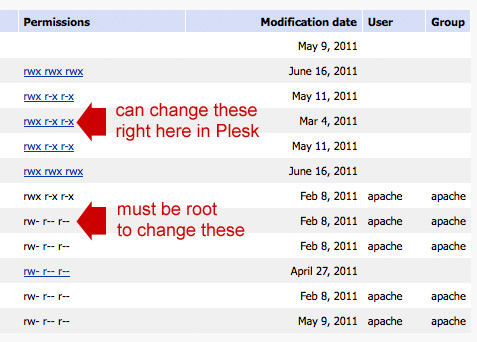 In Plesk, you’re not root, so you’re not modifying files owned by apache

Translating 665 chmod values into plain english (for the .htaccess file)

Translating 775 chmod values into plain english (for the /downloadables/ directory)

When it gets to this point, where everything is locked down and nothing seems to work, there are two ways forward, depending on your host/server setup:

If you’ve got access, SSH provides numerous ways to get the job done. In this situation, the end-goal is uploading some large files to a locked-down downloadables directory. The easiest way is to log into your server as the root user via SSH, and then use the scp command to upload the file directly. Here is the general syntax:

And here is a breakdown of what it means:

How to upload a file via SSH

Here is the scp command as it looks entered in Mac Terminal:

What the SSH scp command looks like in Terminal

So, using this technique to upload a large file to our locked-down downloadables directory, the scp command looks like this:

If we needed to upload an entire directory, we would modify the command like this:

Using one of these commands, it’s possible to upload files and directories of just about any size. If, however, you would rather FTP your content, you can use SSH to change the permissions of restrictive directories, which in my case was the downloadables folder.

To change file permissions via chmod, navigate to the parent directory of your target folder and enter the following command via SSH:

And that’s going to give you all the access you need to upload anything you want. Just remember to restore the original .htaccess rules and file permissions once you’ve finished uploading those precious goods.

Blackhole Pro: Trap bad bots in a virtual black hole.
Thoughts
DIY: Monitor File Changes via Cron working perfectly for over a decade.
Mastodon social is a trip. Glad I found it.
As a strict rule, I never use cache plugins on any of my sites. They cause more problems than they solve, imho. Just not worth it.
Currently on a posting spree :)
6 must come before 7.
My top three favorite-to-write coding languages: CSS, PHP, JavaScript.
If you’re not 100% sure that you can trust something, you can’t.
+ More thoughts »
Topics
Find me on the social medias
Around the site
WordPress help
Favorite projects
© 2004–2023 Perishable Press • Yes Theme by Monzilla Media • Built w/ shapeSpace • Sitemap • Policy • RSS • John 3:16